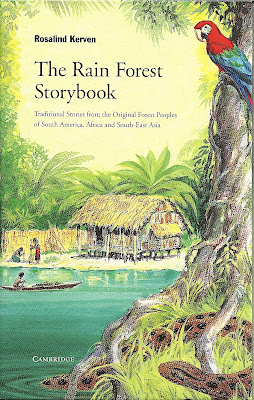 “conjurs up visions of a vanished, magical time when people could converse with animals, plants and elemental forces… deepened by a factual commentary on how the rain forests and the cultures they support are being deliberately exterminated. This is moving and important reading.” - Books for Keeps

“Told in the voice of the people themselves, Rosalind Kerven’s adaptations capture the spirit of their lives, traditions and beliefs...prefaced by a thought-provoking introduction” - Hadith Nzri, published by Action Aid At the time of writing this book, destruction of the world’s rain forests was often in the news and I was fascinated by the occasional glimpses that media reports offered into the people that live in them. What, I wondered, was their perspective on the forests that provided their homes and yet were in such danger?I chose the three largest areas of rain forest: South America, central Africa and South-East Asia. Although the peoples of these areas have all produced a huge variety of stories, I looked specifically for those with a ‘forest’ theme. My final choices ranged from esoteric myths to amusing ‘tall stories’ - each one unique and fascinating in its own way. The factual introduction to each section was checked over for accuracy by Survival International, the charity which works to protect tribal peoples throughout the world.


THE FOREST PEOPLES OF AFRICA


THE FOREST PEOPLES OF SOUTH-EAST ASIA

Jaguar: take care, hide yourself when his footfalls come near.
Jaguar: he is the master - of thunder, of fire; moon-brother, sun-brother, master of the caves and mountains, chief of all the animals…
Jaguar: he goes where he will, does what he wants; friend or enemy, he chooses to please himself. Love him, fear him, always respect him…
Listen: more mysteries. There are men in this village who can transform themselves into jaguars. the shamans, the wise men, the mystery men: the ones who can make their minds fly freely to run with the spirits, and come back again.
Jaguar: is he man or spirit, cat or shaman? Who can tell, when he passes so softly, softly through the shadows?
- from Jaguar Man


Hush: listen. Can you hear the Forest?
Leaves dropping, softly, softly; rain pattering on the leaves. Creatures scuttling, creeping; the cracking of twigs; monkeys chatting, bees humming. Lianas creak as they sway in the wind, and far, far off, an elephant calls.
Listen to them all, my friend. Ah, but there is one sound you can never, ever hear, because it has been destroyed for ever - it is extinct. And that is the most Beautiful Song in the Forest.
- from The Most Beautiful Song in the Forest


There was a lady called Gumiloh. She was proud, she was beautiful and she was clever. Lots of young men courted her: one even persuaded her to make half a promise of marriage Yet, in her heart, she felt that none was really her match.
One day she was working on the longhouse verandah, laying out piles of freshly cut rice in the sun, when she felt a stranger’s eyes upon her. Looking up, she saw an arrogant looking youth.
‘Who are you?’ she called to him.
‘I am Kichapi,’ he replied.
‘Well then, Kichapi: what do you want of me?’
‘I have fallen in love with you, lady. I want to marry you.’
Gumiloh laughed. ‘Oh, if that’s your game, I’m afraid you’re too late, for I’m already betrothed to Bilantur.’
‘Then un-betroth yourself, lady. Whoever he is, I’m a much better man than him.’
‘Oh yes?’ said Gumiloh. ‘Do you expect me to believe that? I don’t know even the first thing about you!’
‘No,’ said Kichapi, ‘but I’m certain you’ll be impressed when you hear the amazing story of my life.’
- from The Superman of Sarawak