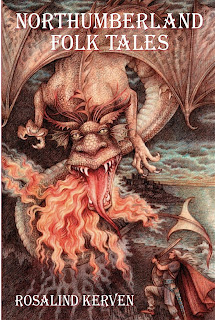 "A book that all ages can enjoy, and one that offers escapism, history and fun in one package" - North-East Lifestyle

"should attract readers of all ages, stirring the imagination of the young and perhaps stirring the memories of older readers recalling their own childhood" - The Northumbrian

"A fantastic little book of folk tales and a very interesting read. Featuring local landmarks and quirky ancient beliefs, it makes you want to go and investigate for yourself.  I think this would be great to read to children, with the almost lyrical prose."- 5-star review on www.goodreads.com

This book became an instant bestseller in the local tourist market of my home county of Northumberland, helped by its wonderful cover by artist Yvonne Gilbert. It contains eight little-known stories from the area, featuring dragons, fairies, ghosts and more.

The book was published under my own imprint, Talking Stone (named from a Native American myth about a magical talking stone that was the source of all stories). Talking Stone has since gone on to very successfully publish my award shortlisted children's fiction series, Grim Gruesome Viking Villain (www.grimgruesome.com)

A thick sea-mist once came rolling in over the sheep pastures; and when it cleared, there was a sorcerer on the road!
I don’t know where he came from, but he was a sour-faced brute of a fellow, mounted on a demon-horse that snorted fire from its nostrils like a dragon. He rode at a leisurely pace, staring around from sunken, bloodshot eyes. By the time he reached the village it was nightfall.
The villagers screamed when they saw him: they all rushed inside their cottages and bolted their doors. The sorcerer cursed at their backs. Then he went down to the river, built a fire, hung a cauldron over it and crammed it full of weird ingredients. Soon it was bubbling away, giving off a foul smelling steam.
Next morning, the villagers peered out, hoping and praying the sorcerer would be gone. Unfortunately he wasn’t. And his spells had conjured up something extraordinary: a huge, ugly castle!

- from The Sorcerer, the Knight and the Witch